All Rook Endgames Are Drawn?

Siegbert Tarrasch (1862-1934) was a world title contender with strong opinions about much of the game. He once famously claimed that all rook endgames are drawn, an exaggeration that contains a lot of truth. However, you can only make so many imprecise moves before teetering over the edge. See if you can spot the white's brilliant 53rd move in Karjakin-Morozevich. Full coverage is here: http://chessbase.com/newsdetail.asp?newsid=8671
Posted by Jeremy at 8:06 AM No comments:

I try to focus on opening memorization as little as possible when teaching classes or private lessons. Instead, I like to focus on following opening principles. However, someone playing without a lot of memorized opening knowledge needs to start calculating early in the game. Here, a player (not one of my students) makes one early mistake and gets a horrible position. Silver Knight's coach (and soon to be master?) Justin Burgess doesn't let him escape.

Posted by Jeremy at 6:15 AM No comments:

I took a couple days off to head back home for Thanksgiving. The whole family gathers in Madison each year for a great time and way too much food. I wasn't planning on playing any chess on this trip, but my high school coach invited me to play a simul at my old chess club and I couldn't turn down the opportunity. In all, I ended up playing 7 opponent's simultaneously, ranging in strength from near beginner towards about 1850.

One game followed my favorite simul formula: The opponent let me play Bg4, to pin his king-side knight. Eventually I was able to play Nd4 and take on f3 to destroy the pawn wall in front of his king. My opponent defended better than my normal elementary school opponents do, but eventually I was eventually able to mate on g2 in the whole that his pawns had created.

I played the Pirk in one game and immediately regretted it because white has a dozen paths to a safe position there. Fortunately, white sacrificed two pieces for a rook and eventually lost another exchange. Converting the extra piece was straightforward.

The game I was most concerned about was against the 1850 rated adult. The last time we had played in a tournament game I ground out a win in tough fight. Somehow, despite finding myself out of book by move 3 (1. e4 e5 2. f4 d5 3. Nf3!?), this game went very smoothly and he resigned right before I was going to promote a pawn.

I failed to complete the sweep because my brother Daniel, also a graduate of West High, played the exchange variation against my French Defense. In the past Daniel never studied chess seriously, but still reached around 1800 when he was still playing 7 or 8 years ago. I never managed to get more than a slight advantage in the nearly symmetrical positions we had all game, and I was even lucky to hold a draw in the king and pawn endgame.

In the most exciting game of the day I had white against a promising young player. This game is a good example of the challenges of simul-play. I got a great position out of the opening, but missed the tactic that could have given me a quick win. Instead, I entered tactical complications that didn't work out, and suddenly I was worse. Fortunately, my opponent went for an endgame instead of playing for mate and I ended up with the largest pawn phalanx I've ever had. A few days after the game was played I tried my best to recreate it from memory. I'm sure there are a few mistakes, but you can play through the game below.

I just taught the closed Sicilian, one of my childhood favorites, to a student. It's a fun system because you basically just have to develop, sacrifice either the f or e pawn and attack. Here's a recent example from the Internet Chess Club.

Puzzle of the Day

One of the most common mistakes I see among players of all levels is that they tend to cut off a calculation too soon, when there are still more tactics left in the position. In a recent online game I played as white in the position below. I had just played Be3-d4, allowing Nxd5 (Ra2 is also playable), leading to a forced series of captures and checks. See if you can calculate the moves to the end of the lines after Nxd5 and figure out what one of us missed. Please leave your evaluation of the position in the comments. 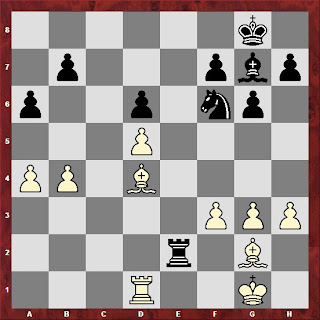 Last week I saw a documentary film on a New York City chess program, which makes great points about chess and education. It's highly recommended for chess players, teachers, parents and just about anyone else.

My personal connection is that I received some career advice when looking for chess jobs from one of the film's stars, Elizabeth Vicary (now Elizabeth Spiegel). Also, one of my co-workers at Silver Knights has a brief cameo in the background.

The following position occurred in one of my recent online blitz games against an IM. He had white and shook up the position with Rxb6!?. You can post analysis in the comments: what is the evaluation of the position? Is white winning losing or drawing? 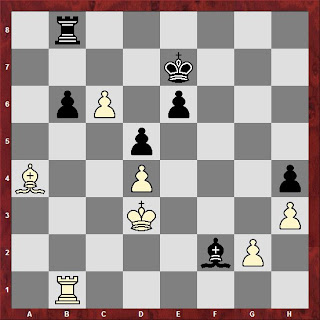 Posted by Jeremy at 5:42 AM No comments:

Waking up from Hibernation

I put this blog on hiatus a few months ago because I wasn't playing or teaching much and was feeling sapped of inspiration. I'm not sure if I have the willpower to keep it going again this, but my DC Chess League game from last Friday was dramatic enough, that I needed somewhere to post it.

If you have any ideas for material to help keep Minor Pieces up and interesting please leave a comment.