Long Night at the Office 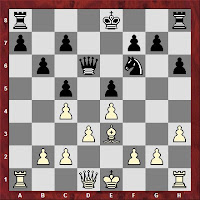 What is the best move for white?
Last night's DC Chess League match was a home game, so it was literally at the Office. I looked up my opponent, Andrew Samuelson, before the game and found some improvements on his previous games in the database. Unfortunately, his improvement came on move 5 and I started killing lots of clock time on mediocre moves. After I played 14... b6?, reaching the diagram above, the position became critical. Once the opponent fixed my weakness with 15. Ra6! I realized that I was going to lose the a-pawn by force because while can quickly get three pieces to the a-file.
Somewhat to my surprise, the game still had 57 moves left at this point, but I'm still in the early stages of figuring out just what was going on. Stay tuned.
Posted by Jeremy at 4:45 AM