This post is a story and a couple of puzzles. See how your solutions stack up to mine and those of my eight year old student.

I decided today to teach one my students a lesson on the bishop pair. For the first example I started with one of my tournament games, which had reached the following position with black to move. What would you play? 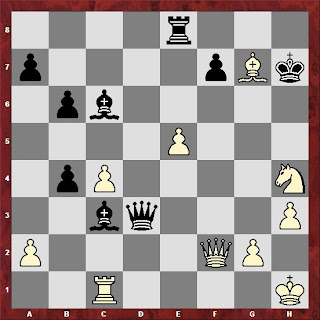 After considering many options, this student decided on 1... Rg8! This was the move I played in the game. I consider it the most logical choice in the position. (You could argue that 1... Qxh3+ 2. Kg1 Bxg2, is as good, but in that case you are probably a computer, because position looks much complicated to me than the game continuation.) The kid had worked out how 2. Bf6, maybe white's most natural looking move, loses spectacularly to 2... Qxh3+ 3.Kg1 Rxg2! 4. Nxg2 Bd4! and white gets mated on g2!

Instead of allowing mate, the game continued 2. Qf5+ Qxf5 3. Nxf5, leading to the next diagram with black to move. What would you play? 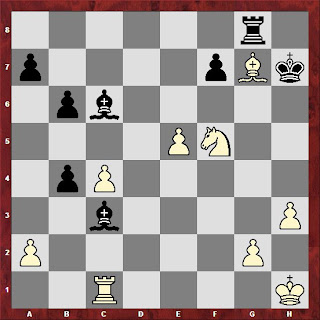 The student thought for a few minutes in this position. He nearly grabbed his c6 bishop to play Be4 or Bd7, both tempting moves that don't improve black's position (White has Nd6 and e6 respectively as responses). I figured that he would most likely follow my play in the game and choose 3... Rxg7. Black would have two bishops against a rook and pawn, which in this case can easily be converted into a win. My version of Fritz evaluates that position as nearly two pawns in black's favor.