Can You Refute My Novelty?

On Friday night I played in the DC Chess League against the highest rated active chess player in the DC area, IM Tegshsuren Enkhbat. We played a complicated game, where I held most of the winning chances, but I let him escape into an opposite colored bishop endgame, where my one pawn advantage meant nothing. I'm still in the process of analyzing the game, so this post will focus just on the opening.

I was too sick last week to prepare anything against my opponent's Catalan, so the morning of the game I decided to just play the Tarrasch Defense, a relatively unpopular (maybe for good reason) opening that I have played on and off for over a decade. My lack of preparation showed itself on move 13, as we played on of the main lines of the opening and reached a theoretically important position that had occurred 45 times in my database. 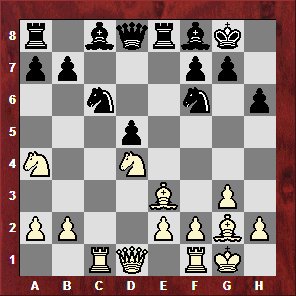 I was aware that 13...Bd7 was a reasonable move, but I didn't see why I would want to weaken the defense of the b7 pawn when my opponent wants to play 14. Nc5. I thought of trading on c5 and d4, then playing Bc6, but that position looked pretty bleak. After ten minutes of thought, I protected b7 and avoid a trade on c6 by playing 13...Na5. I thought this seemed like a reasonable idea and was surprised to find out when I got home that none of the previous handlers of black's position had thought this move made sense.

My opponent thought for 15 minutes and demonstrated the awkwardness of my move by playing 14.Bf4, threatening a fork on c7. Unable to keep my knight on the edge I returned wtih 14...Nc6!? With the interesting point that his bishop on f4 is no longer able to take part in a blockade on the g1-a7 diagonal (for instance in front of black pawns on c6 and d5). White did not come close to refuting my unusual opening strategy and quickly sacrificed an exchange for decent, but not overpowering compensation.

You can see the opening of the game below, with more analysis to follow later. More interestingly, can any of you find a path to an advantage for white against 13...Na5? If not, perhaps this novelty is a tiny contribution to the theory of this variation, one where black has been struggling. A bit of my analysis is below, but so far I haven't found anything amazing for white.