I played in the DC Chess League last night and won an interesting, but very shaky game. In my previous game against this opponent, he got a good position by playing the rare and slightly unsound Blackmar-Deimer Gambit (1. d4 d5 2. e4?!). This time, shortly before the round, I decided that I could trick him by playing 1. d4 Nf6 and after 2. Nc3 d5 I was going to play Nxe4 and reach positions where black scores very well in my database.

As is usually the case for me, once I decided to try an opening outside of my normal opening preparation, the opponent played something unexpected and I found myself on my own early in the game. I had the black side of the Trompowsky (2.Bg5), an opening with which the vast majority of my experience was on the white side. I thought that my opponent was moving too many pawns in the opening, so I played very aggressively for the first dozen moves only to realize five moves later that he had rebuffed my attack and I was worse. I fell into time pressure and my opponent mostly played well, leading to the following critical position where white could gain a large advantage with the right 29th move. How would you continue the attack? Please decide on your own and then you can scroll down for the answer. 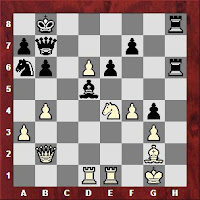 White can gain a large advantage with 29. Qe5! Black has no satisfactory defense to the combined threats of  an exchange sacrifice on d5 and the d6 pawn moving down the board with discovered check. Maybe best would be 29... Rh5 30. Ng5 f6 31. Qxf6 and white is up a pawn with a serious advantage.

Instead of the winning line my opponent chose the tempting 29. Rxd5, planning on 29... Qxd5 30. Nc5, seemingly winning material. See if you can spot the flaw in that plan. It may help to scroll to the diagram below. 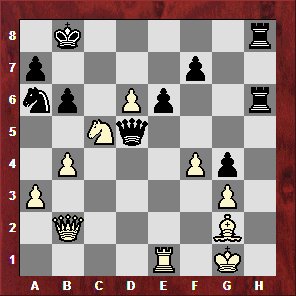