Washington International Rd 3 - Asking too Much

In the third round of the Washington International I was paired with a 12 year old, if he weren't better than me at chess he could have been one of my students. He was actually the reigning Wold Champion for that age group, Samuel Sevian. Here's a picture of us playing the game (actually mostly him looking board). 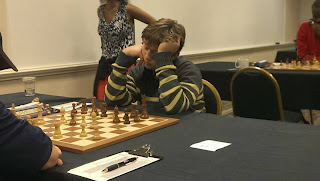 Unlike most games this tournament, I got a promising position out of the opening. Then, when he threatened to create a dark squared blockade to shut down my initiative, I sacrificed a pawn. By move 21 all of my pieces were well placed and I had the option of regaining my pawn whenever I needed to. However, only a few moves later I started going a bit crazy. I felt that I had an advantage, but none of the variations I calculate led to anything better than some trades and maybe a slightly better endgame. Normally, this would be a great result against an opponent 150 points higher rated than me, but after having drawn the previous two games, I wanted a way to play for more. Instead of going into the endgame, I kept pieces on the board and played a complicated middle game, without ever taking the time to regain my pawn. As we fell into time pressure, my initiative slowly dwindled and my material disadvantage grew, until I found myself in a lost position. This endgame was worse than the games I had held in the previous two rounds, and despite attempts to complicate, I eventually took my first loss.


Summary: I over-pressed after a promising pawn sacrifice in the opening.

Lessons I should have learned: Don't attack just because you want to. Follow the needs of the position.
Posted by Jeremy at 7:27 AM