Instead of recovering from my round three loss, rounds four and five were two of the weakest games I've played since leaving Chicago. Round four, against 2400+ rated Sean Vibbert (a rising talent), I allowed white to get away with far too ambitious play in the opening.


What would you play for black in the position below? 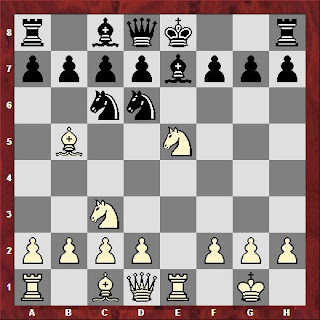 I trusted that my opponent wouldn't have allowed me to take on b5 without a good reason, so I traded on e5. This is a serious mistake, letting white get active pieces while my knight on d6 makes development awkward. The position should still be tenable, but I defended poorly and resigned in the face of forced mate on move 32.

I justified not taking the bishop based on the line 1...Nxb5 2.Nd5 - where white threatens Nxc6 followed by taking on e7 with a good position. If I had looked just two moves deep, I would have seen that black has 2... Nbd4, defending against white's threats and keeping an extra piece. As a result, white would have had to accept a slightly worse position with 2. Nxb5.

The following game I had white against IM Adu, but again didn't know what I was doing in the opening and had no advantage in the following position.


What would you play for white? 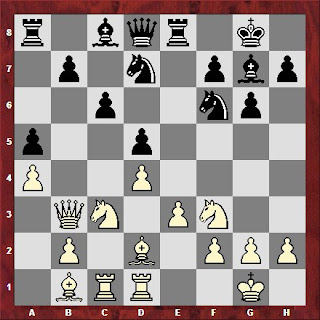 I'm not sure what the best move is. Maybe white should play Bd3, but really and move that doesn't weaken the position should lead to equality.

I convinced myself that black had serious issues defending f7, so I played my only active idea, e4. Like in my previous two white games (see recaps of rounds one and three for details), I refused to accept equality and entered dangerous complications in the hopes of winning. This time, e4 is just a mistake that isolates my d-pawn for no reason. I ended up sacrificing on d4 to get some activity, but my opponent defended well, I missed some opportunities and I never get back in the game.

Summary and lesson finally learned: Poor calculation and overly aggressive play got me into trouble repeatedly this tournament, and these games were the worst offenders. After the third loss in a row (first time since 2005), I told a friend that I was going to stop forcing things and try to just find decent moves as the position requires. He wished me luck with this type of zen-chess. This lesson sunk in, at least temporarily. My calculation didn't improve much, but I played a couple of games after this one, without going too crazy.
Posted by Jeremy at 11:46 AM