I wasn't competing against the theory of evolution, at least not directly. Instead, my second game was against Darwin Yang, probably the strongest scholastic player in the country and rated well over 200 points above me. I've actually known of Darwin since he was little, as he competed each  month with a Madison chess prodigy Brian Luo for the top spot on the nationwide rating list of some single digit age group. While Brian took a break from chess at some point, Darwin kept going and is now an IM very close to the Grandmaster title.

Here's a picture of me playing the game, sitting next to the youngest player in the tournament (also higher rated than me!). 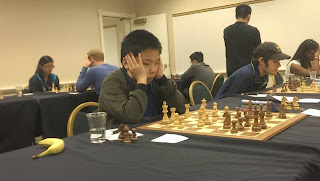 I played the black side of a fairly classical Queen's Gambit and had a fine position for the first 14 moves, before playing a very normal looking and quite bad 15th. I hadn't paid enough attention to my pinned d-pawn, and Darwin continued to slowly crank up the pressure, playing an excellent first 32 moves. By that time he had won a pawn for free and continued to attack with the hopes of winning more. Fortunately, at that point my prestigious opponent failed to switch gears from calm positional pressure to knockout tactics. He had at least three excellence opportunities to shift from pressing an advantageous to winning a decisive amount of material. I think that he was concerned that I would get counterplay in each instance and didn't want to have to risk miscalculating a sharp line.

Eventually, I was able to trade knights, queens and finally rooks. Still down four pawns to three, the only remaining pieces were bishops on opposite colors. This balance made it impossible for him to make progress. First he declined my draw offer, but returned it a few moves later. In the final position, I can allow white's king to escort the passed pawn forwards. In the meantime my bishop could capture white's f and g pawns. My plan was to sacrifice this bishop for his passed pawn and then bring my king to h8, where it could never be pushed away from blocking white's last pawn.

Summary: One bad move got me into trouble early on, but my opponent missed some winning chances and I was miraculously able to reach an opposite colored bishop endgame to secure the draw and a great 1/2 score at the end of the first day.

Lesson I should have learned: It's important to calculate vigilantly in the opening, even in seemingly calm positions.