I took a fun weekend vacation to New York last weekend and of course fit in a bit of chess along the way. My main chess goal of the trip was to stop by the Marshall Chess Club, which is probably the most prestigious chess club in the country and a former hang-out of a young Bobby Fischer. If any chess fan is visiting New York, I encourage them to stop by just to see the sites. They also seem to always have a tournament going on, although I didn't have time to participate. The highlight was probably that I was able to impress my travel companions by chatting with the star of the documentary "Brooklyn Castle." It was cool to meet Elizabeth Spiegel in person for the first time because she is perhaps the most accomplished chess coach in the country at the moment and had provided me with some career advice that led to me ending up in my current job. 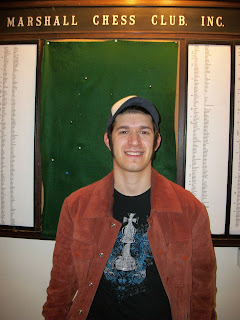 The next day I played my only game of the weekend, a blitz game with someone in Union Square Park. There wasn't any money riding on the game, but it was still nice to win with a sacrificial tactic in the opening. As usual for a blitz game, the game the tactics were interesting, but sloppily played. The opening was imprecise by both sides and my sacrifice would have been more forcing one move earlier. Here's the part of the game I remember. The rest was just cleaning up with my extra piece. 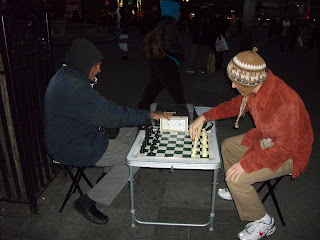 Here's a picture from the start of that game. My face is barely visible behind my hat. This was also the first time in quite a while that I've used an analogue clock.
Posted by Jeremy at 6:35 PM